Which is when a woman chooses to have another one gestate her egg without any medical necessity.

It costs $150,000 to have a baby this way. “If social surrogacy was more affordable, more women would be doing it, absolutely. There’s an advantage to being pregnant, the bonding, I understand that, and from experience I can say that most women love to be pregnant. But a lot of women don’t want to be pregnant and lose a year of their careers.”

Yeah, and Donald Trump is going to make America great again so that we can all have enough money to pay a LEGAL immigrant from the third world carry our babies.

What really matters to women is wage slavery. Creating life ex nihilo and then nourishing the future of humanity is kind of an inconvenience. Women would rather have a career as an insurance representative than get pregnant.

[Dr.] Sahakian describes himself as a feminist.

Of course he does.

Feminism is not an ideology. There is no core of beliefs. There is no objective measure by which to determine what is feminist and what is misogynist.

“Every day I see how prejudiced this society is, how male chauvinistic it is, how women are judged.”

In fairness, I am very judgmental towards women. I will give him a point.

This is more than the unfairness of men being able to have careers and babies at the same time, when it is so much more difficult for women.

Is that society or biology?

It’s not a social construct that women get pregnant for nine months and men have no physical affects.

I thought these people worship Evolution. Shouldn’t they be blaming Science for making women the life-creators?

Yeah, because all men have to do is get hard. A trip to that store off the interstate can fix that. But women have this whole biological system thing that defines their whole existence so much that they count their months by it. This is just how Evolution created everything. Clearly Evolution did this because it’s in the best interest of the fittest of the species. Why should we question the wisdom of Evolution?

Also, old men shouldn’t have children. It’s definitely screwed up when you’re 80 years old at your kid’s graduation. Paul McCartney and Mick Jagger both have young children, who will basically be orphans raised by single mothers once their fathers die.

Really, I don’t think old people should have sex in general. Once you get to something like 30, maybe 35, just go gently into the good night. Sex is for teenagers. “When I was a child, I thought like a child, reasoned like a child, and acted like a child, but when I became a man, I put away childish things.”

I understand that it’s controversial, it’s borderline unethical for some people, but put yourself in the shoes of a 26-year-old model who is making her living by modelling swimsuits. Tell me something – is it that unethical, to say let’s not destroy this woman’s career?”

I feel so sorry for 26-year-old models who want to keep the party going forever. They have hundreds of thousands of dollars to blow on blow and every man in the world wanting to put a baby in them, and they’re all like, “Yeah, but I could keep going until I’m 29.”

One of these days, society will come to terms that you cannot both be a devoted parent and a have a full time career as a world-travelling model. That day will come when all the blacks and Aztecs finally murder the last white person.

Then, in 2006, Sahakian became responsible for the oldest woman in the world on record to give birth. Maria del Carmen Bousada, a retired sales assistant from Cadiz in Spain, had her twin boys the week before her 67th birthday. Bousada was diagnosed with cancer less than a year later, and died in 2009, leaving her toddler sons orphaned.

See, that’s not society saying it’s messed up for a social security dependee to be raising children. It’s Death itself saying so. The reason old people don’t have children is because they die so easily. Just one bad winter day is all it takes.

Here’s a picture of her looking all old and disgusting: 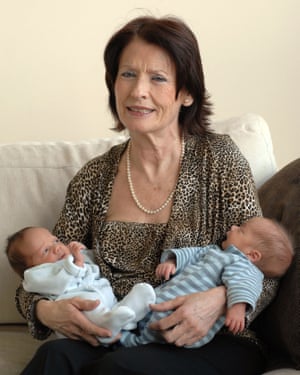 Oh but the doctor has an excuse for that too:

He feels no responsibility for her twins in Italy. “That’s why I wouldn’t treat a 67-year-old woman. She was a perfectly healthy 57-year‑old. She died from cancer, so she didn’t have a pre-existing condition. You can get cancer at 28.” He has since cut his upper age limit to 55, but still doesn’t ask his clients for conclusive proof of age.

Here’s an ethics question. What happens if the surrogate mother decides she wants to keep the baby? Is she legally obligated to hand him over?

The word “want” appeared 21 times in the article.